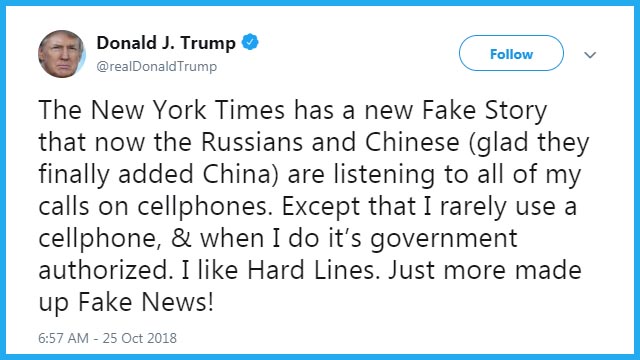 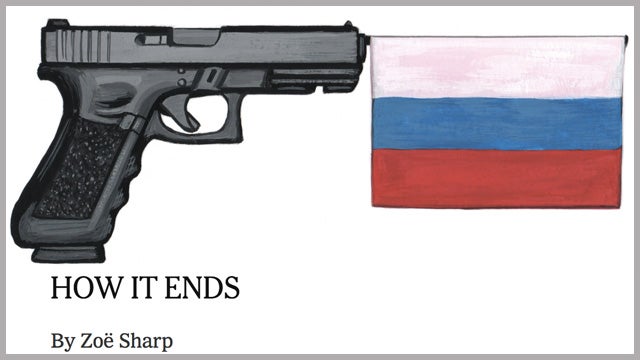 RUSH: So Donald Trump has been busy tweeting. Among the things that he has tweeted — and, by the way, I saw this all day yesterday on my tech blogs. There was a story. The New York Times had a story that Donald Trump has three iPhones, and the one that he uses the most is totally unsecure and that the ChiComs and the Iranians listen in on every conversation and that Trump knows it but doesn’t care. Really? Really? 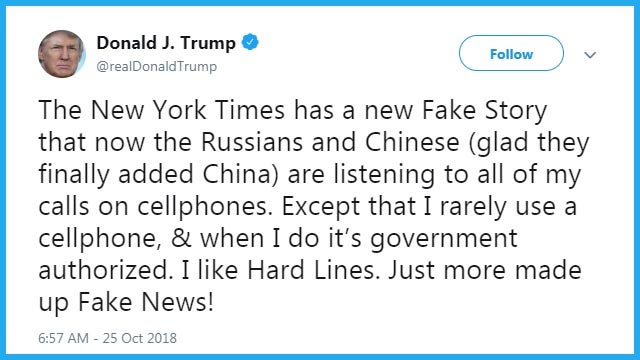 So all of my little tech blog buddies picked the story up and are running with it with the snarky laughter. They believe it because, like everybody else on the left, they believe Trump is a blooming idiot. Because their gods at the New York Times and the Washington Post and CNN tell them that. So you put out a story this stupid — this stupid — that Donald Trump knows that a cell phone he uses is routinely, regularly monitored by the ChiComs, and he uses it anyway.

And they don’t say, “Maybe Trump is spreading false intel. Maybe he uses that phone to confuse them?” Nope. They automatically assume that Trump is such an idiot, such an egomaniac that he’s so much smarter that not even the ChiComs could understand what he’s talking about. That’s the tone of the coverage. I happen to know Trump does not use a cell phone for these kinds of things. He uses land lines, folks. He does not use email. He does not even text.

So he tweeted, “The New York Times has a new Fake Story that now the Russians and Chinese (glad they finally added China) are listening to all of my calls on cellphones. Except that I rarely use a cellphone, & when I do it’s government authorized. I like Hard Lines. Just more made up Fake News!” You know what my reaction to this is? All these little smart-ass leftists out there sit there in their smarminess and their arrogance thinking that Donald Trump is a mental midget and an idiot, and they couldn’t accomplish 1% of what Donald Trump has accomplished — and yet they smugly sit there and assume that he’s such an idiot. 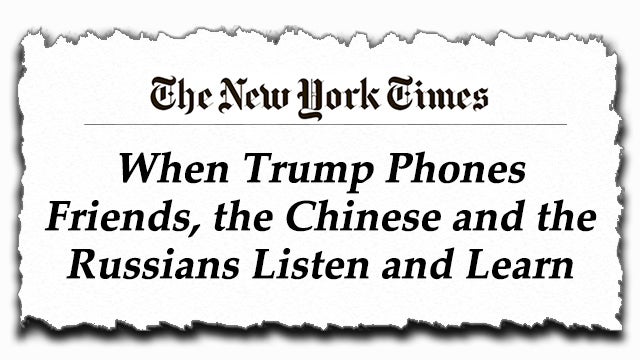 And they’re very scared that Donald Trump is giving away American secrets by stupidly using a cell phone that the ChiComs routinely hack. Can you imagine how upset those same smug smart-asses would be if they learned that for four years an American secretary of state was using an unsecured private server in the basement of her home that handled thousands and thousands of classified, Top Secret communications, and that that secretary of state carelessly allowed those communications to be transferred to the laptop of a serial internet crazed pedophile who called himself Carlos Danger?

Can you imagine what the New York Times and these smarmy leftists would think if they found that…? Oh! Oh, wait! I’m sorry. They do know that. They know that we actually had a secretary of state who was using unsecured servers for her tenure as secretary of state trafficking in Top Secret, classified documents and data, and they didn’t care. They thought she was so brilliant, they wanted to elect her president! I mean, this is worse than hypocrisy. This is abject stupidity.

(impression)”Donald Trump poses a great threat, knowingly uses phone compromised by ChiComs,” and they praise Hillary Clinton for being so damn smart. Oh, yeah, it’s such an injustice she’s not the president. She actually was hacked, day in and day out. She was, and so was the president of the United States when he was communicating with her! The vaunted Barack Hussein O. You know, I really… There are some days I just have a hard-to-contain disdain for these people and their arrogance and their smugness and their condescension about things. 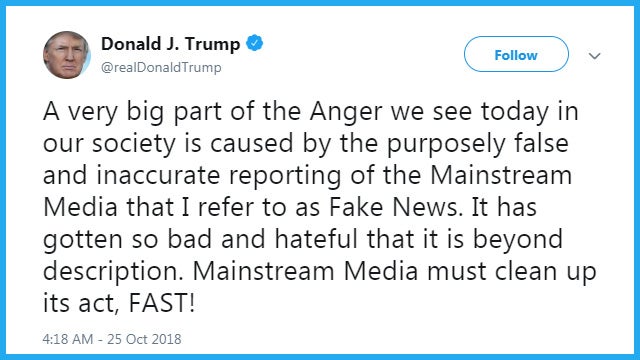 Some days it just gets to me. I just ticks me off. Another Trump tweet: “A very big part of the Anger we see today in our society is caused by the purposely false and inaccurate reporting of the Mainstream Media that I refer to as Fake News. It has gotten so bad and hateful that it is beyond description. Mainstream Media must clean up its act, FAST!” Every word of that is true! They’re out there calling Trump Hitler! They’re calling him a Nazi.

“The Secret Service agents clustered around him, ushered him toward the armored limo idling outside at the curb. The Russian waited until they were a few steps past before he drew the gun. He sighted on the center of the president’s back, and squeezed the trigger. The Makarov misfired. The Secret Service agent at the president’s shoulder heard the click, spun into a crouch. He registered the scene instantly, drawing his own weapon with razor-edge reflexes.

“The Russian tasted failure. He closed his eyes and waited to pay the cost. It did not come. He opened his eyes. The Secret Service agent stood before him, presenting his Glock, butt first. ‘Here,’ the agent said” to the Russian assassin. “‘Use mine.'” New York Times published this yesterday. A Secret Service agent helping a Russian agent assassinate Donald Trump after the Russian’s gun fails to fire. No wonder the New York Times couldn’t resist publishing it even on a day when they are pretending to be horrified by the thought of violence because of some bombs being sent to Democrats.

You know, a couple of mouse clicks could have told the writer of this piece that the Secret Service don’t use Glocks. They’re not issued Glocks. They use the Sig Sauer P229. A minor point. A minor point. So this actually ran in the New York Times. They explained the reason for publishing the piece. The New York Times said, “Our focus here at the Book Review is on books and stories, but also on how the books being written and read reflect the world outside of books.

“And one of the biggest stories out there, of course, is the Mueller investigation and the relationship between Trump and Putin. It’s hard not to speculate…” It’s made up! They’re justifying a story on the assassination of Trump by a Secret Service agent based on the Mueller investigation! I’m telling you these people are not right, folks. They are troubled. They are suffering psychological disorders that have been brought on by the unrelenting hatred they feel over the outcome of the 2016 election.

They are out of control.

These are the same people that published and reviewed a movie on how to assassinate George W. Bush during his presidency! And all day long yesterday and all day today we’re getting preached to by the people in the media, “It would be very, very dangerous to start speculating who’s behind the bombs before we have the facts. That is very, very disturbing.” They’re preaching to us about civility, when they are running stories and publishing excerpts from books fantasizing over the thrill and the joy of Donald Trump being assassinated!

Does anybody find something seriously wrong with these people, other than me? There’s something seriously mentally, psychological wrong here. I mean, it’s one thing to run this. It’s another thing to not realize how plain and simple wrong it is. And then to justify it based on the Mueller investigation? (impression) “Well, there’s a lot of interest out there, Mr. Limbaugh. Mueller is looking into the ties between Putin and Trump.” There aren’t any! How about the ties between Hillary and Putin?

Will there be any ties! You haven’t found any! There never were any! There were none to be found. There wasn’t any collusion! Anybody with an open mind and an IQ of a pencil eraser knows it by now! But not these people. Happiness, glee over fiction resulting in the assassination of Donald Trump, promoting it on the same day they’re wringing their hands about how sordid and horrible it is that so many bombs have been sent to “Trump targets.” Anyway, Trump is right on the money with his tweet about the media being culpable.