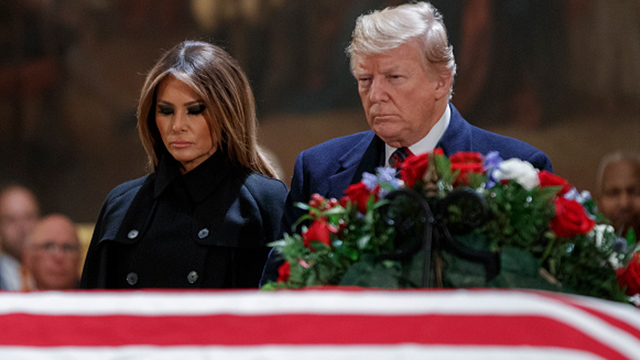 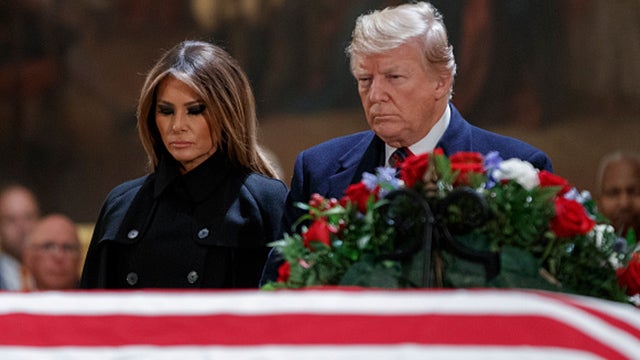 RUSH: Here is Patrick in Brecksville, Ohio. Great to have you, sir.

CALLER: Hi, Rush. How are you? Mega dittos, 1991 dittos. You know, with the Bush funeral, I’ve had a real hard time, you know, kind of feeling my normal grief or normal respect for him. I respect him. I think he was a fantastic man. But given how cynical I’ve become on so many things and sort of his lack of fighting back and what the Republicans have done over the last 40 years, I find it really hard now to have as much, you know, respect or grief. It’s certainly like, you know, I didn’t feel like the way I did when Reagan passed.

It kind of troubles me, but I think it ties into where we’re at today. I think it ties into Trump. You know, and I almost hold — I don’t identify as a Republican anymore, but I almost hold them more responsible than the liberals. Liberals are what they are. We know we’re not gonna get anything from them. When I call my congressman on the right, you know, Republicans, and you get basically the same treatment from the liberals, there’s no fighting back, you know, George H. W. Bush, George W. Bush, I mean —

RUSH: Well, see, wait. Let me stop you because this is exactly what’s being praised. And this is what’s phony about it. They’re praising the Bushes both for not fighting back, basically allow the left to steamroll. Bush changed his —

RUSH: — take on taxes. That’s what they’re praising as bipartisanship. That’s what they’re praising as an era gone by, when we could work with Republicans, when Republicans agreed to lose, when Republicans agreed to let us win. That isn’t Trump. And I’ll go so far, I think what you’re trying to say — and correct me if I’m wrong, but I think what you’re trying to say is that, in truth, the reluctance of not just the Bushes — there’s a lot of Republican elected people that didn’t want to fight back ’cause they’re scared to death of the media. Didn’t to want fight back against Obama because they’re scared of being charged racist. And that lack, that reluctance is what gave us Trump.

RUSH: There you go.

CALLER: 110 percent. That’s the full draw-out of that for me. And that’s what they still don’t get about why we support Trump. I don’t always agree with everything he does, again, we can go into that nonsense, but again, when I talk to people, I take him and his fight and his support of us and trying to do what’s right and taking it to the other side and trying to accomplish these things over the lay down and die and let them run over us. 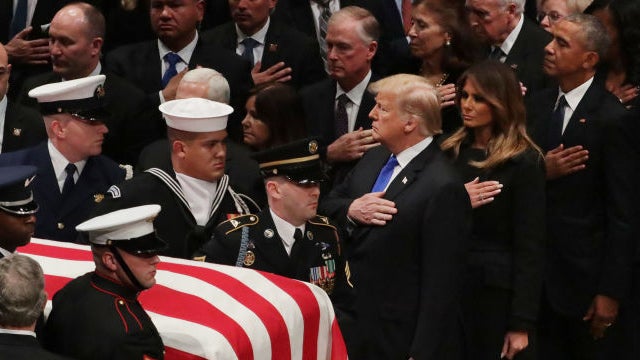 So, you know, I’ll take the good with the bad, right? And to me, the past 40 years, what have Republicans solved? George Bush was a good, decent man, yes. But what did he really get done? What did we really benefit from it? And so at some point I get kind of tired of supporting that when I really don’t ever get any payoff for it.

RUSH: This is precisely why I have been trying to stress that what we have been seeing today is not the way our politics used to be. It’s the way the left wants it to be, but it’s never been this way. The Bush family, the Bush values, the traditions, virtues, whatever you want to call them that defined them and governed their philosophies of life is what we’re seeing.

And my point is that that that we’re seeing used to define the whole country or the vast, vast majority of it. And it’s important to know that’s what’s been lost, the virtues, the values, the manners, what have you, that people are watching in this funeral are what used to be the norm. And we’ve lost them. And not because of Donald Trump. We have lost them because there was a war raged against them, waged against them beginning in the late eighties or the early nineties.

I could even peg it, if you wanted to put militant feminism in this mix, which you can, it’s clearly one of the many ingredients of the culture war, you have to go back to the late sixties for that. The attack on America, as founded, has been ongoing since then. But the real intense version has been within many of our lifetimes. And here’s the thing that people in Washington, both parties, refuse to understand. This isn’t a political skirmish over the budget. It’s not a political skirmish over how many more years we’re gonna have Social Security.

People who voted for Donald Trump genuinely believed their country as founded was at stake. When those are the stakes, it doesn’t matter that your guy defending you may have manners on Twitter that are not recommendable. It doesn’t matter. What matters is saving the country from the marauders on the left who want to basically erase every vestige of our founding and turn this country over to people for whom it was never intended. And in that kind of a battle with that on the line — but Washington doesn’t see that crisis. Republicans, Democrats, there isn’t any kind of crisis. It’s the average political arguments of the day. They come and go. That’s the great divide.