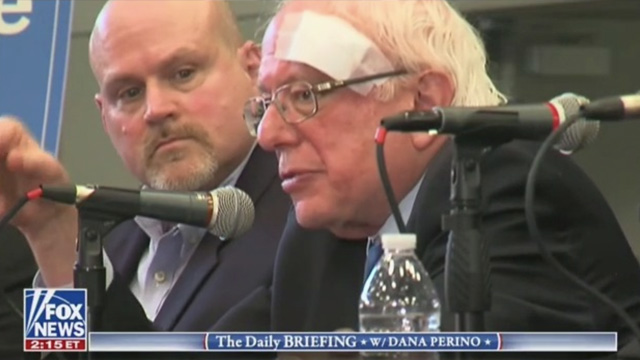 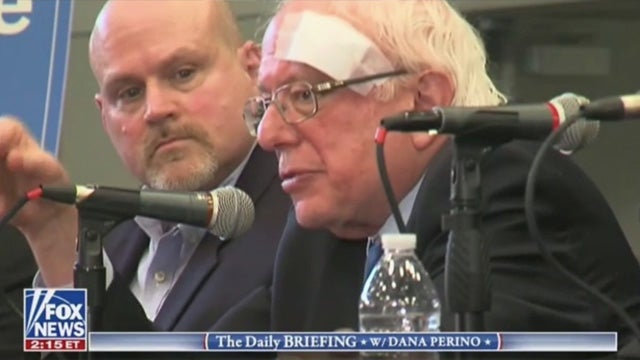 RUSH: What is that on Crazy Bernie’s head? Look at Fox right now. What the hell happened to Crazy Bernie? Did you see that? There’s a gigantic bandage over his left eye, whole forehead, like somebody hit him. Oh, there’s Mr. Vanilla out there. What’s his name, Beto O’Rourke, vanilla Obama.

Anyway, AP: 420-0 vote, the House says Mueller report should be made public. In the Senate, Lindsey Grahamnesty has blocked a resolution calling for the Mueller report to be made public. I’m telling you, folks, these people are going crazy. (interruption) Is that what happened? Bernie hit his head on a shower door and got seven stitches. Bernie Sanders hit his head on a shower door. Did he slip and fall or did he open the door into him? That’s all we know. It’s a big bandage. You see that bandage on there? Do you see the photo?

I once had a meeting with Arlen Specter at the 21 Club in New York and he showed up with this gigantic, gigantic patch over his left eye. And then a black eye patch over that. He had had some kind of eye surgery earlier that day. But, boy, he looked like a Bond villain. I mean, it was so distracting. I don’t remember anything he said. I couldn’t take my eye off of his eye. I mean, it was this gigantic thing, half his head was covered by this thing, and he’s just speaking normally and he’s telling me what he wants to talk to me about.

And I’m trying not to notice it, but you can’t not notice something like that. Now, Crazy Bernie’s eye isn’t covered, but his whole forehead is. So we need to joke about socialists opening shower doors into their heads and then we’ll have the day complete.