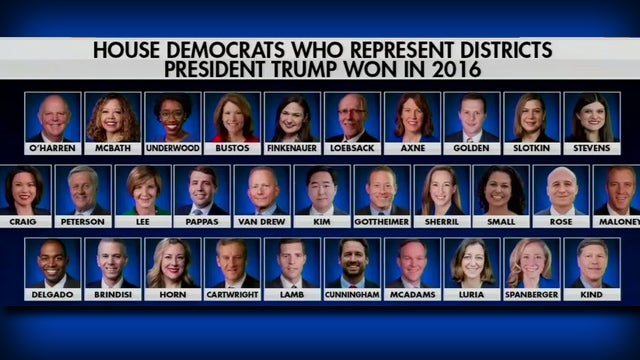 RUSH: Daily Caller contacted the offices of all 31 House Democrats from districts where Trump won in 2016 to ask them if they would vote to impeach President Trump because many of them have not publicly stated where they stand. According to the Daily Caller, every office was contacted at least three times. 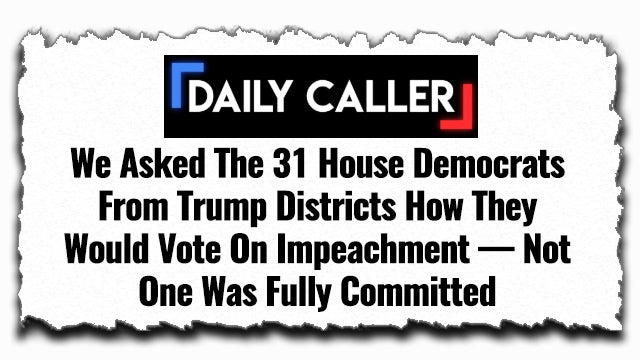 All offices were given a lot of time to respond. They’ve not yet made up their minds, all 31 have not made up their minds. They are still weighing the facts, which is an interesting thing because there aren’t any facts. It isn’t a fact that the president abused his office. It isn’t a fact that the president asked Ukraine to dig up dirt on a political opponent. That is a lie. It is somebody’s opinion that Trump has abused his office.

They don’t have any factual evidence of abuse of power, abuse of Congress, abuse of his office. And these 31 Democrats in Trump districts say they are weighing the facts. Let me tell you what they are. They are terrified. They are terrified to tell us where they stand. They’re in a box.

I pointed this out yesterday. These are districts that voted for Donald Trump and are gonna vote for him again. If they vote to impeach Trump, if they vote to impeach somebody that the district is gonna reelect, they’re thinking, “Man, that could be bad for me.” And then, on the other hand, as I also told you about yesterday, Alexandria Ocasio-Cortez is running around trying to find radical left-wing candidates to primary these 31, because to AOC and her Squad, this impeachment’s bogus. It doesn’t go anywhere near far enough.

So they’re in a box. They’re in a box. If they vote not to impeach, then they’ve got AOC out there trying to primary them. My suggestion to them yesterday I’m gonna make again today. Come out and fully support Trump. If you want to get reelected. All 31 of you Democrats in Trump districts, he’s gonna run again, he’s gonna get reelected, come out and support him. You don’t have to go on campaign visits with him, you don’t have to go to rallies, but come out and support him, and you’ll be reelected.

Now, you’re gonna get reelected, and I understand the leadership in the House is not gonna be happy with you, but you will be reelected if you come out and support Trump. Do not doubt me on this. And for those of you in this group of 31, I urge you to remember Operation Chaos. If you come out and support Donald Trump, you will win reelection. If you vote to impeach Trump, you will not.

And if you vote to impeach Trump, you’re still gonna get primaried by AOC and her radical leftist mob because whether you vote yes or no on impeachment, you’re still not radical enough for them. And keep this in mind: There aren’t any facts. Adam Schiff did not present a single fact. As was evidenced yesterday by the fact that after it had all gone on and on and on, what we finally got was what they’re really mad about: Trump putting kids in cages, Trump tweeting something that was disrespectful to a 16-year-old girl, a 16-year-old activist. These are the things that really rub them raw.

And then the New York Times: “Democrats Agree on One Thing: They’re Very, Very Nervous.” Here’s the case. Here is the four-point defense. You don’t need to go deep into detail. You don’t need to go start talking about Sondland and Vonavitch and Zelensky. All you have to do, both President Trump and President Zelensky say that there was no pressure applied to Zelensky to do anything to get aid. The transcript of the phone call between Trump and Zelensky does not show Trump making any demands or setting any conditions.

Now, he didn’t hear the phone call, the whistleblower didn’t. He was told about it from Lieutenant Colonel Vindman — O say can you see. Then whistleblower, who everybody knows who it is and won’t admit, went over and planned this whole thing with Schiff on the basis that they would be able to characterize the phone call because Trump would never release the transcript because he would want to protect executive privilege for himself and future presidents. 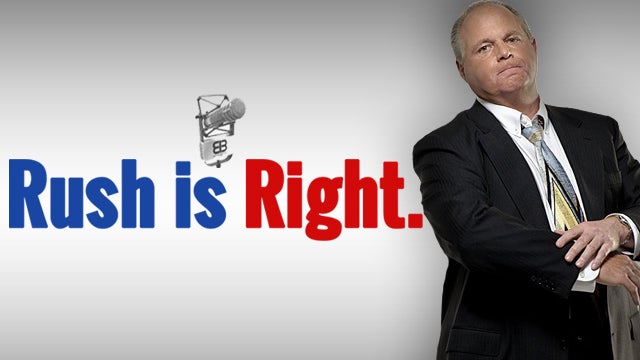 Beyond that, Ukraine didn’t even know that there was a temporary delay on any aid. And finally the aid flowed. Ukraine got its financial assistance without any investigation or announcement of investigation.

So there’s not a single fact. Those are the facts, and the Democrats don’t have any of them. That’s why it isn’t hard to defend Donald Trump at all. It’s easy. It is easy to defend Trump. It isn’t difficult. And it doesn’t require even going on defense to defend Trump.