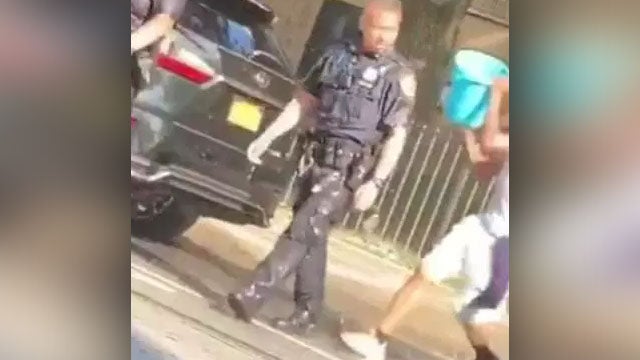 RUSH: Now, the cops in New York. This is in Brooklyn, and you’ve all seen the video by now. One of the people, by the way — one of the gang members who doused one of the two cops with a pail of water — is a member of the Crips gang, not to be confused with the Bloods. What’s remarkable about the video is that the cops just walk away. They are clearly victims of abuse and a crime. They are splashed with water. The perps run up to them and dump entire pails of water on them. The two cops don’t even look back. They just keep walking away. They’d been called to a disturbance in a neighborhood, and they were immediately set upon upon their arrival by people that didn’t want them there.

People saw the video and were outraged at a number of things. They were outraged that it happened. There was literal anger over the complete disrespect for the cops, and there was anger that the cops did not engage even after being doused with water and laughed at and made fun of. They continued to walk away. To many people, it looks like cowardice. The question is, “Why did this happen?” There is an answer to this, and the answer to this is twofold. The first answer is: Mayor Bill de Blasio. The second answer is: Liberal attitudes toward police.

When you have a group like Black Lives Matter leading to a bunch of NFL players refusing to stand for the national anthem and the flag on the basis that cops are a bunch of racist, murdering pigs — and when the Democrat mayors all across the country join in that refrain, and when they lead the charge against police, when they demonize their own police departments — individual cops are going to know that the biggest enemy they’ve got is the liberal mayor and the liberal city council, not citizen perpetrators. These two cops, they looked like… To me, watching the video, they looked resigned.

Resigned to the fact that they’re powerless.

Resigned to the fact that if they had done anything to keep order — if they had done anything that would have involved pushing back against the people committing this crime against them — they would have been the ones that got in trouble. They know it! Cops, military, uniform. They know who’s got their backs and who doesn’t, and liberal mayors do not have their backs. Look at Mayor Pete in South Bend! Mayor Pete’s presidential campaign is being unwound because he doesn’t know how to deal with a police force, because in Mayor Pete’s world, the police are guilty. In Liberalville, in America today, the cops are guilty, the cops are the problem — just like in American foreign policy, the United States is the problem, not the solution.

The cops are the problem; they’re not the solution. Black Lives Matter exists on the premise that cops are white racist pigs murdering random, innocent African-Americans. And there isn’t a liberal politician in this country that doesn’t join that refrain.

Law enforcement being sent away after trying to enforce the law, law enforcement being humiliated and embarrassed? But to people like de Blasio, liberal mayors, that was probably a wonderful video. The cops learned a lesson. Stay out of neighborhoods you’re not wanted.

It was infuriating. But if you understand liberalism, if you just listen to these people. What more do you have to hear them go after all these so-called murdering cops who randomly murder innocent African-Americans, it’s not gonna take long if there’s no pushback to that before citizens are gonna get the idea that the cops are the problem and that the people that run cities and states are also gonna see the cops as a problem.

It manifests itself all the way up to the United States military. Look at Barack Obama as president with his rules of engagement. American military could not shoot oftentimes even after they had been fired on. If they are fired on from a school, they couldn’t return fire. Uniformed law enforcement, uniformed military, in the eyes of leftists, are the problem. They are. They are the destabilizing agent.

De Blasio even talks about raising his son to be afraid of the cops. And he’s the mayor. His wife is African-American, so his son is a person of color, and he often tells people how he has to talk to his kid to be on the lookout for the cops, be on the lookout for the people that might intend him harm. They spread this myth. They spread this. They amplify it. They make it much worse than it ever is.

So, to me, it’s really sad, but it’s no mystery why the cops would not engage. They’re looking at this, “Okay. Some punks are throwing water on us. This is a no-win. Let’s get outta here. To engage this, my mayor is probably gonna find against me as the troublemaker and as the provocateur.”