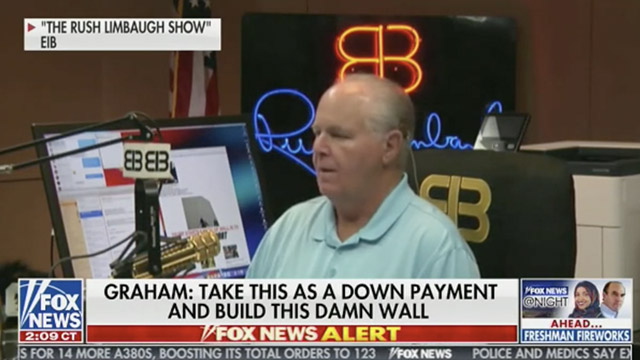 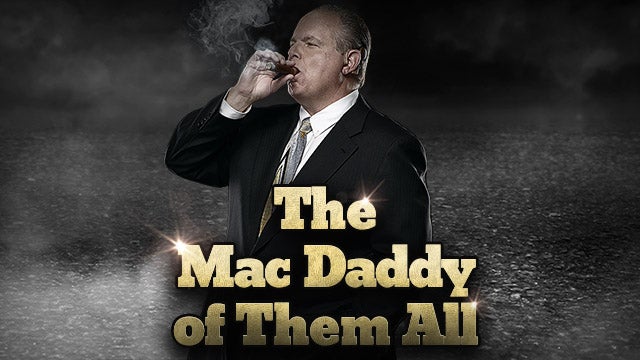 BREAM: Here’s what Rush Limbaugh says on this idea of the national emergency. Here’s Rush. 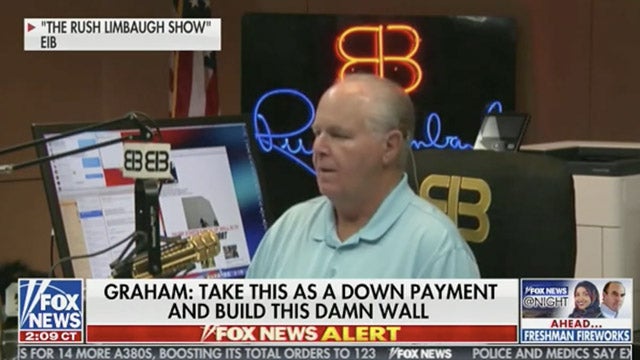 RUSH ARCHIVE: If they have to declare a national emergency and go through the courts and have the Democrats go through the motions of trying to stop it, then all the better. Let the Democrats demonstrate as often, as loudly as they can, they do not want border security.

GRAHAM: Rush is right. I don’t always agree with Rush Limbaugh, but he couldn’t be more right here. The president should declare a national emergency because it is and let the Democrats argue that it’s not. Talk about why they don’t want to secure the border and we do. It is a great issue for 2019 and 2020. We would be idiots as Republicans not to support Donald Trump to try to build this wall any way he can legally.

RUSH: Look, it’s the only way he’s gonna be able to do it. He’s not gonna be able to get any cooperation. No bipartisanship, to reaching across the aisle. What a crock. This is none of that. There isn’t gonna be any of that. We’re already into the 2020 election year. Anything Trump does is gonna have to be outside the realm of Congress and within the bounds of legality, declaring a national emergency, finding funds elsewhere in the budget, have the military build it, that’s all legal. 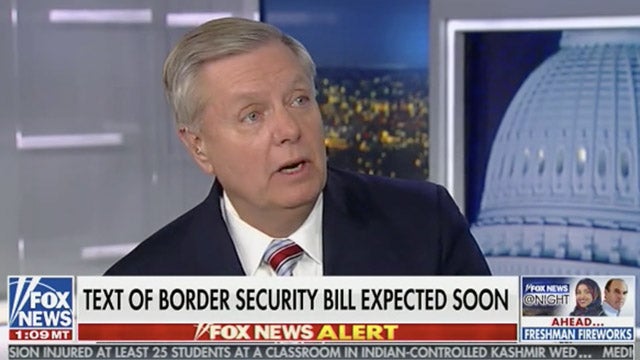 The Democrats will challenge it in court. Let them. Let them demonstrate. They’re hiding behind this legislation. They’re hiding behind the fact that all they’re doing is coming up with $1.375 billion. The rest of this stuff is not gonna be reported to the American people. The vindictiveness in this legislation — look, folks. There’s a new Fox poll out. Most voters favor an immigration deal, and they favor ramping up the border wall and fencing.

This legislation is going to be hidden from the American people, the details of it. Trump cannot lose on this if he stays within legal guidelines in finding additional money to get this done. It’s the only way. And he’s gonna have to do it incrementally. Between now and 2020 he’s not gonna get whatever lump sum is necessary to finish the 600 some odd miles of wall that he wants. He’s gonna have to do it on his own. And I say let that happen and let the Democrats raise hell.

RUSH: Last night, on CNN Erin Burnett OutFront, she’s speaking with the Democrat representative from Ohio, Tim Ryan, about the budget agreement.  Question:  “The president’s biggest allies in Congress, the Freedom Caucus, they want another week on this.  Is another week of negotiations on this deal gonna do to it?” 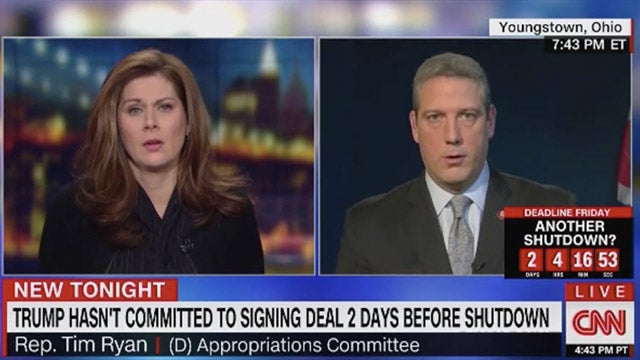 RYAN:  We’re in the same position, and, as the country’s watching this, it’s, you know, Democrats and Republicans in Congress making a deal. Obviously, people who have different philosophies on how to govern coming together for some agreement and then the president waiting to see what the extreme right-wingers talk radio circuit, Rush Limbaugh and others, have to say about it, and then he follows their lead.  So I get a little bit worried about that.

RUSH:  Now, let me just tell you.  Folks, just like the Mueller investigation, these people all know that everything they’re saying here is a lie.  Do you know how easy it would be for me to sit here and act like all this stuff is true?  Let me ask you, what if…? Now, you have been in this audience, many of you for 30-plus years.  What would you think of me if I actually began acting like the president doesn’t make a move until consulting me?

You would lose respect for me, ’cause you know this is not the way this is done.  You know business never has been done this way, and these people know it too.  Tim Ryan should be ashamed of himself.  This is not what’s happening up at the White House.  But they all know it.  The media… You know how I know they know it?  Because not one of them has called to actually talk to me about it.  If they really thought that President Trump was so mindless that he couldn’t make a move without talking to me, they would be asking me to appear on every television show they host.

They would be asking me. They’d be calling me. They’d be wanting to know the details. They’d be wanting to know, “How does this work? What do you think of this, the president not moving until you say so one way or the other?”  They know this is bogus, because, if it really were true, they’d be so outraged and ticked off, they wouldn’t be able to ignore it.  That’s not the purpose of all this.  Now you’ve got these members of Congress that are coming along and echoing all of this for the express purpose of continuing this effort to diminish Donald Trump.

That’s what this is all about is trying to make him smaller and smaller and look like he’s less and less qualified, less and less engaged.  This is so classic.  “And then, of course, the president waiting to see what the extreme right-wing talk radio circuit, Rush Limbaugh, has to say about it, and then he follows their lead.”  Mr. Ryan, you know that that’s caca.  If it were true… If they really believe this, I would be called up to testify before congressional committees! If they really thought all this.

Up next, CNBC Squawk Box just this morning, the co-host Joe Kernen talking about Trump and the border wall agreement — and, of course, your beloved host. 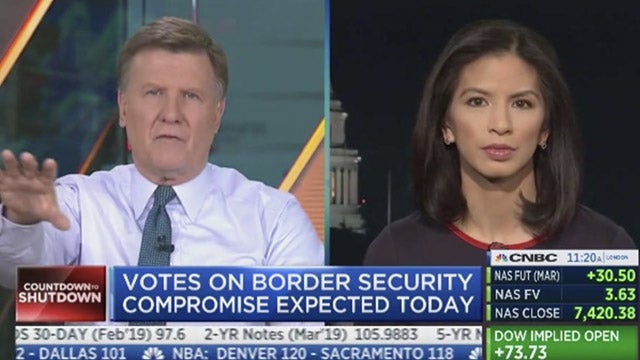 KERNEN:  I saw a step-by-step defense of how the president could characterize this as a win from Rush Limbaugh.  So it was almost point by point: You say this, this, this, this, this.  I know it’s a cynical time that we’re in where you can get talking points from a conservative radio host. But, I mean, there was some merit to what he was saying in terms of this is gonna go on for years; the funding is not gonna be in one giant piece. So that if it gets 55 miles, it gets 55 miles. The Republicans do not have 60 senators and the House is gone. So there’s no other way, really, at this point to move forward without closing the government, which no one wants to do again.

RUSH: So the guy just echoes what I said, and he was forced to say here that there was some merit to what I was saying. He’s laying out in his words what I laid out yesterday. What I was telling you why I thought the president was gonna be signing this. And it’s exactly that. There’s no way they can change the makeup of votes in Congress by promising or doing another government shutdown. There simply is no leverage available. The Democrats run the House. There aren’t 60 votes in the Senate. Republicans, therefore, were stuck. 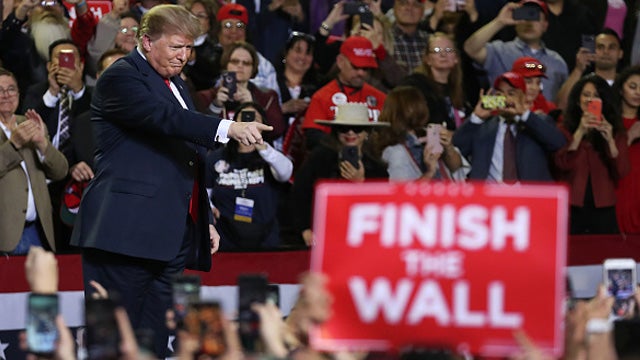 But I hear these guys begrudgingly saying, “Limbaugh is spelling out what Trump has to do, but I have to say it made a lot of sense.” Then they go on and try to characterize it again further and further. But it’s true. That is the lay of the land. Not signing this and then causing whatever happens, the shutdown, is not gonna change anything. It’s only gonna delay what’s gonna have to happen ultimately, and that is the effort to build a wall continuing outside the bounds of legislation but within the bounds of legality using all available techniques and opportunities and laws that exist in the executive branch.