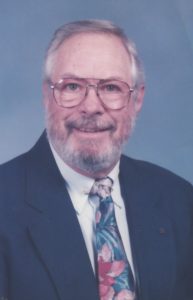 Wilbur Earl Bastin, son of the late Fred and Orpha Bastin was born June 24, 1931 in Chicago, Illinois and died September 28, 2019 at the age of eighty-eight years.

He was united in marriage November 17, 1990 to Barbara Ann Johnson.

He was preceded in death by his parents and two brothers, Raymond and Paul.

He attended Cornerstone Family Worship. In the past he served as Sunday School secretary and superintendent, Royal Rangers Senior Commander, president of Men’s Ministry, deacon and usher.

He loved to work in his wood shop and volunteer at local nursing homes. Everything he did was unto the Lord. He had a love for people and could always bring a smile.

A special thank you to Three Rivers Hospice for the outstanding, compassionate care and support given.

Graveside services will be at New Hope Cemetery on Tuesday, October 1, 2019 at 1:00 p.m., under the direction of Carter Funeral Home, Inc., West Plains.