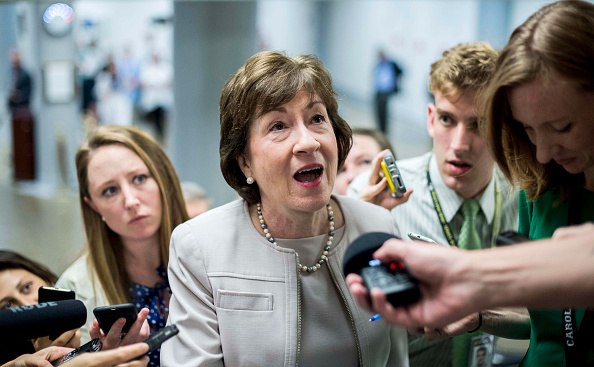 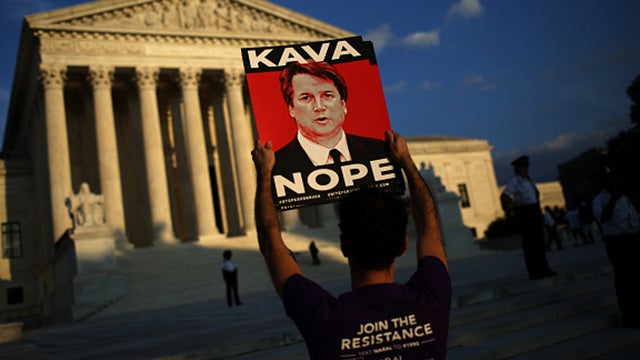 RUSH: There’s been a lot of talk, and, I will admit, even for me. What are the Republicans gonna do if Kavanaugh’s not confirmed? Are they gonna sit home, gonna be fired up? What are they gonna do? That’s not the question. The question is, “What are the Democrats gonna do if Kavanaugh is confirmed?” That’s what I think may be the bigger question — and, in the interests of discovering this, let’s go to the audio sound bites. We have a group of protesters occupying Senator Collins — Susan Collins of Maine — office, and during the protest, one of the protesting women made some remarks… 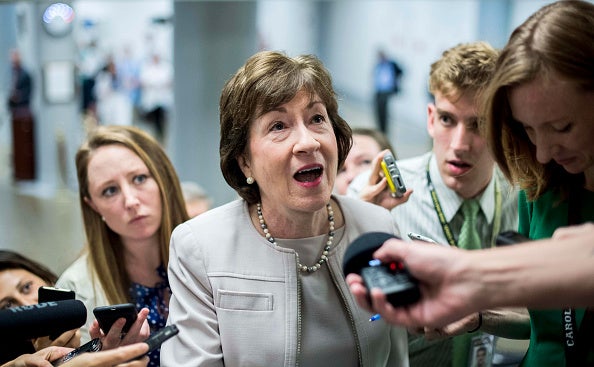 WOMAN: I am begging, begging Senator Collins to not put a blind eye, to stand with us. It devastates me that I have to stand here! I stood on the steps of the Brooklyn Supreme Court last night and spoke at a vigil. I got on a train this morning at 6 a.m. It terrified me that I and other survivors have to tear our bodies apart and share our stories. Vote “no” on this confirmation. Do not turn a blind eye. Listen to us! Listen to me! Listen to our stories. We are not opportunists when we do that. Hear me. Vote “no” on this confirmation. Do not put a serial perpetrator on this court. Hear me, believe me, see me.

RUSH: “It terrifies me that I and other survivors have to tear our bodies apart and share our stories.” I think Planned Parenthood tears your bodies apart. I don’t think Kavanaugh’s doing that. I don’t think Susan Collins is doing that. And you call him “a serial perpetrator,” but there’s no corroborating evidence. Now, what is this woman gonna do if the Democrats lose this? Go to the shrink or go to the polls? What’s she gonna do? Just asking. I’m just asking.

RUSH: Little background here on that female protester sound bite we just played. These Kavanaugh vigils at these various courthouses around the country, those are organized by Move On, just FYI. MoveOn.org started… (interruption) Does anybody remember how Move On started? Right. The MoveOn.org movement was started during the Clinton impeachment proceedings, and its purpose was, “Come on! Let’s move on! Let’s stop the politics of personal destruction! Leave our president, the most moral man in America, Bill Clinton, alone, will you?”

That was the original charge of MoveOn.org. If you’re gonna do anything, just give him a slap on the wrist. No lower than that. Might hurt. Just a slap on the wrist and then let’s move on! Now Move On has become a very pro-left, anti-America activist group. And that rant that we just played in the audio sound bite, it’s almost word-for-word what every other one of these protesters has said. They’ve memorized it. And it must have been focus grouped.

These are paid professional protesters, folks. You have to understand that. These people are there because of George Soros. Just like all the Black Lives Matter people that show up in Ferguson, Missouri, or wherever, these are paid, bought-and-paid-for protesters made to look like it’s an organic movement of people genuinely outraged by Republican Senate action and Kavanaugh. They are bought and paid for. They are given focus-tested scripts. ‘Cause I’ve heard that rant from a number of different protesters at different places. That’s why I think it’s probably been focus grouped.

RUSH: By the way, Fauxcahontas. You should know Fauxcahontas was out speaking at an anti-Kavanaugh rally, and she got booed and practically shouted off the stage because she forgot to mention Native Americans as an aggrieved group in America. I’m not kidding! A bunch of leftists practically had to storm her tepee and get her off of the stage ’cause she didn’t mention Native Americans.