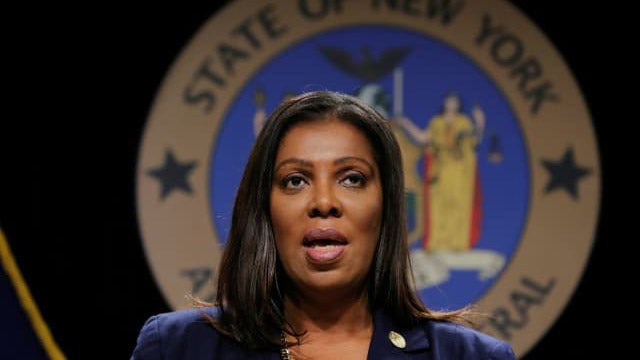 RUSH: This New York state attorney general, Letitia James. So all this morning long this woman, she’s the attorney general from New York, and everybody’s convinced that the state of New York and the city of New York, the DA there, Cy Vance the 14th or whatever, they’re all going after Trump and his money. And they’re all going after Trump and Deutsche Bank.

And they’re gonna get him, they’re gonna get Jared and everyone. So she’s been hyping this press conference all day today, at 11:30, but she didn’t tell anybody what it was gonna be about. So at 11:30 the thing starts, the Drive-Bys the whole morning are thinking that this is it. How many times have they thought this? This is it. Today we nail Trump. This is it. Today we find out Trump’s been lying about his financials. This is where we find out that Trump is a criminal. This where we find out this, that, and the other thing. So she starts her press conference, you know what it is? Just listen. You want to talk about a Drive-By Media letdown. Try this.

JAMES: They used millions upon millions of dollars from the NRA for personal use, including for lavish trips for themselves and their families, private jets, expensive meals and other private travel. Wayne LaPierre, Woody Phillips, Joshua Powell and John Frazier instituted a culture of self-dealing, mismanagement and negligent oversight at the NRA that was illegal, oppressive and fraudulent.

RUSH: That’s right. With gun sales at a record, gun sales are a record high right now, and it makes perfectly understandable sense with all the rioting and lawlessness and the Democrats talking about defunding the police, here comes Letitia James announcing a lawsuit against the NRA in New York state. When’s the last time you heard anybody talk about the NRA, even the Democrats? It’s not on their radar. The Second Amendment’s always there but they got some distractions in their way.

This was a huge letdown for the Drive-By Media. They were convinced that she was gonna announce some case against Trump.

RUSH: Mark, Nashville, Tennessee. Glad you waited, sir. You’re up next on the EIB Network. Hi.

CALLER: How you doing, Rush? Snerdley told me to get right to the point, but I just want to give best wishes to you and Kathryn. I kind of understand where Kathryn’s at. But I wanted to talk about the New York AG. It’s more of a nothing burger than you even said because she didn’t file criminal charges. She’s the AG. She could have filed charges. But no, it’s just a lawsuit.

RUSH: That’s true. So what is your point about it?

CALLER: Well, my point is she’s the AG. I mean, they could indict a ham sandwich and they couldn’t even indict these guys on fraud, which is what she’s accusing them of. So they got nothing.

RUSH: Well, I have an alternative take on some of this stuff. She calls this press conference today and immediately — and she doesn’t tell anybody what’s coming. Obviously she didn’t tell anybody what’s coming because the Drive-Bys all thought that it was gonna be about Trump’s finances. I mean, there are companion stories about Deutsche Bank having released Trump’s financial records. That story bucked up right against the story that she was having her press conference at 11:30.

So the media clearly thinks that this is about Trump. And the media then thinks that she’s got evidence that Trump’s lied about his wealth and that he has gotten loans illegally and that Deutsche Bank propped him up and they were gonna finally — this was gonna the day where they got to the bottom of Trump’s lying, stinking financial falsehoods. Then she takes to the stage, to the podium, and we got all of this diatribe on the NRA. And everybody’s scratching their heads. NRA? So what?

We know the left doesn’t like guns. But the fact of the matter is — and Salena Zito has a story about it — people are buying guns in record numbers. Record numbers of guns are being sold all across America every day, every month because what do you think they’re gonna do when the Democrats get serious about defunding the cops, when the Democrats join protesters and rioters and looters, when Democrat governors and mayors go out and try to join those people as they’re rioting and as they’re looting? What do you think people are gonna do?

So they’re out there buying guns left and right. And she’s going after Wayne LaPierre for playing golf and misappropriating funds from the NRA for his personal pleasure and enjoyment. I think this, folks. I think, contrary to what you’re hearing in the Drive-By Media every day, I do not believe the Democrats think that they are cruising to a landslide win over Trump and in the House and the Senate. I don’t believe they think that for a minute. In fact, I think they probably think the opposite.

And I think this going after the NRA is a way to reenergize some Democrats to go out, because they hate the NRA. I think this is a way to fundraise. I think it may be a way of getting out the vote. And no, not just in New York. This is a national assault on the NRA. But I think what it means, in a generic sense, is that they are not confident that they are on the verge of winning all of government back, never, ever again to relinquish it.

And it’s gonna backfire on voter turnout and fundraising, if I’m right about that. It’s gonna backfire big time on ’em. But the bottom line is they didn’t go after Trump, did they? She let everybody think that’s what was gonna be announced, and not a word was said about it.

Democrats, you’d better figure something out fast. You start talking about this nonsense, you know, you think you’re just playing to your Twitter base, but Twitter is not America. Twitter is not even close to being America in terms of majority. And you think a majority of Americans want to get rid of the cops? How does that jibe with people going out and buying guns left and right and right? We got more people buying guns for the first time than ever before in this country.