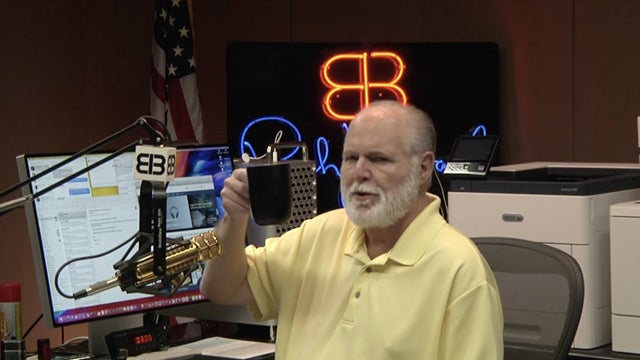 RUSH: Now, yesterday, folks, I told you about this great new coffee mug from Ember. I got it as a Christmas present. I had never heard of it. I didn’t know what it was. All I knew was that I used to serve myself coffee in one of the Tervis tumblers that we make available at the EIB Store because it’s insulated — and, of course, it keeps things hotter longer, and it keeps things colder longer and doesn’t sweat when you put ice cubes in there.

But still, hot beverages cool off to the point that you get about half of what’s left in the mug undrinkable because it’s gotten room-temp cold. So I get this gift, and it’s a mug. This is it. I’ll hold it up here at the Dittocam. This is the 14-ounce version, and it goes on a saucer that is a charger. A full charge lasts about an hour, hour and a half.

And there’s an app for your phone that you use to pair the mug with your phone. It uses Bluetooth. And after you do that, you can then select the temperature that you want the beverage, and you can select it for coffee, for tea, hot chocolate, whatever. There are default temperatures for all of those. But you can change ’em. And you can watch it work, the iPhone app will tell you and show you as the temperature’s approaching whatever you’ve set it to be.

The cool thing about this is that after your desired temperature has been hit, it doesn’t cook the coffee. That was the one thing I was leery about. Because in the old days of a coffee maker at home or an office and you put it on the burner and it stays there, you know, after it’s been on the burner all day the coffee in the pot is yuck-o because it’s cooked. It’s burnt. I thought, well, how can this not end up being the same way? But it doesn’t cook it. It keeps it tasting as fresh in two hours as right when you poured it out of the pot. Like, I’ve had this mug here half full for probably since the show started, for an hour. I’ve maybe had one sip of it.

Now, normally I’d have to throw this out because it’d be cool, it would be room temperature. But it’s just like I poured it out of a freshly made pot right now. Now, the one I was given developed a problem. Well, I don’t think it was charging properly and the mechanism, the flashing lights on the mug change colors based on what’s happening. It’s a certain color when your desired temperature’s been hit, a certain color when the mug is charging, a certain color when a full charge has been hit, and my lights were not going through the full spectrum, so I never knew. But you can check the charge on the app on the iPhone. 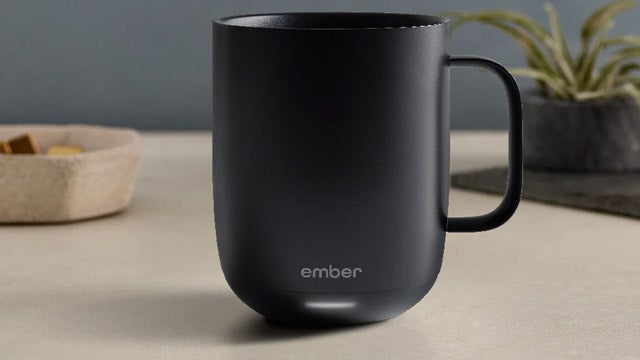 Anyway, I was having a problem, and I got hold of customer service, and they were awesome. You know, customer service, to me, is where many companies make it. And they ended up sending me a replacement. I didn’t even ask for it. It came in a couple days ago. They sent me the 14-ounce one ’cause they had my data. You have to fill out the data when you make a customer service call or email like I did.

But I had found a work-around for the one that I didn’t think was working. I just leave it on the saucer, therefore it’s constantly charging and stays full charge, but you can take it off the saucer, walk around for an hour and it will keep the temperature that you’ve set, and it’s Ember.

I got this note from a friend. “Rush, do those Ember mugs really work? You were talking about ’em yesterday. They really work? I’m gonna buy two of ’em if they do.” No, they don’t work. I was lying through my teeth. What do you mean was I telling the truth?