RUSH: I meant to mention something at the top of the hour and I forgot it. Let me get to it now.

We released an upgrade to the Rush Limbaugh app a couple of days ago because there’s new code, iOS 13. Every time Apple issues a new operating system every September, there are, of course, advancements, new ways of doing things. They’re constantly trying to come up with operating systems that use less power, that use power more efficiently so as to promote longer battery life. They do this in combination with the new central processor chips that they put in the phones — the design — every year, and the operating system does the same thing.

And when they do this, some apps, like ours, have to change the way we interact. So, we had to upgrade the Rush Limbaugh app in order for the audio player in our app to function with iOS 13. So, that app upgrade, we released to the App Store two days ago. It’s up and running. If you have the app already on your phone, it should update automatically, or it should show up. The way you go is just open the App Store (not the iTunes store, the App Store) on your phone, and go to the Updates tab at the bottom and tap on it.

If you run the Rush Limbaugh app, it’ll show as needing to be updated or that it might have already automatically updated. If it hasn’t, just tap on the Update button and you’re good to go. You’ve got until tomorrow at noon or 1 o’clock Eastern. That’s generally when Apple issues new operating systems or updates, at 1 o’clock Eastern time. Now, you don’t have to automatically update to iOS 13. You can wait until 13.1.

But the point is, if you upgrade to iOS 13 tomorrow or Friday, please make sure that you’ve upgraded the Rush Limbaugh app before you do that. Now, here’s something else. I don’t know if you do this, but in iOS 12, which is the current Apple operating system for iPhone and iPad, they introduced an automatic system upgrade option. The way it works, if you enable that, then they will release the update — and it may happen that night or within a week.

But when your phone is plugged in and charging overnight, after midnight, it will automatically install the new operating system. You don’t have to do anything if you have the automatic update option enabled. Some people don’t know if they have it enabled or not. The way you find that is you get your phone and you go to Settings/General/Software Update. You do that tomorrow at about this time, and you will see iOS 13 as available to upgrade.

If you have automatic upgrade enabled, you don’t do anything — and just one night while you maybe even forget it, iOS 13 will be installed while your phone is charging. You have to be connected to Wi-Fi, the phone has to be plugged in charging, and it has to be after midnight. That’s how it’s programmed to do it if you set up auto. The point is if you’ve set up auto, it’s gonna do it anyway, and you had better upgrade the Rush Limbaugh app.

If you don’t, what will happen is you won’t be able to play the audio. The audio player in the current version — well, in the old version before it was updated — simply wasn’t compatible with the changes Apple has made in iOS 13. I will remind you of this a couple of more times today and tomorrow morning. Now, again, let me run through the procedures here. If you have the Rush Limbaugh app… You know, here’s the thing: If you don’t have the Rush Limbaugh app, you really should think about getting it. Go to the App Store on your iPhone.

It is the blue icon with the little A in there — well, a big A. You tap on it, go to the search field, and put my name in — Rush Limbaugh — and you’ll get two options. You’ll get The Limbaugh Letter or the Rush Limbaugh app. The Rush Limbaugh app’s icon is black with a really stylish photo of me on it (I was in charge of this; I made sure that the app icon met my own personal standards) and then you simply download it. It’s free.

Once you have the app on your phone, you can access our website via that app. You’re not gonna actually be assessing the website. It’s actually through the app. It’s the same content but it is its own app infrastructure. And everything you can do on the website, you can do on the app. Including watch the Dittocam, including stream live or archived audio of the program. As I say, the download’s free — and if you don’t want to become a member, you don’t have to. 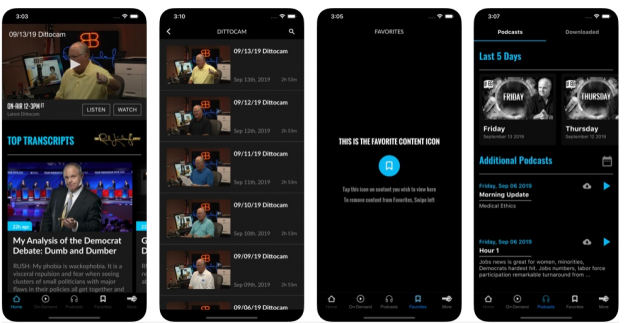 On the free side, you have access to all of the encyclopedic content that has accrued on this program over the many decades. If you become a member, which is totally optional (it’s an in-app purchase), that’s when you can watch the program on the Dittocam every day on the app. That’s when you can stream the program live and access the podcasts of each program about 30 minutes after the program ends each and every day.

And there are, of course, other benefits to becoming a subscriber to RushLimbaugh.com. There’s an option to get the monthly newsletter — the digital version or the actual printed magazine. But it’s encyclopedic content, folks. If you listen to this program and you hear things and say, “Oh, man, I gotta remember that! I gotta remember what I just heard. I gotta be able to tell people.” You don’t have to remember anything if you have the app, because all the transcripts are there. Just search it.

You can copy and paste from the transcripts, and you can share and email and text whatever you want from the transcripts to any of your friends or your enemies — the point is, to anybody — and you can do all that on the free side. It is when you become a paid member that you get the Dittocam and the archived audio stream and archived Dittocams as well. Folks, it is so much content. It’s incredible how much content’s available.

So, if you don’t have the app, that’s how you get it. Go to the search field in the App Store, the Search tab there, and put my name in. It will pop right up. It’s free.

The in-app purchase is if you want to become a subscriber or a member, and there are various price tiers. If you have the app, again, make sure you upgrade it on the App Store before you install iOS 13. Now, pardon me for being redundant here. But tech stuff, a lot of people don’t catch it the first time around. This is nothing to be afraid of. Nothing is going to break. It’s just if you don’t update the app and you do install iOS 13, the next time you try to listen to the program you won’t be able to ’cause the audio player in the old version of the app is not compatible with iOS 13. 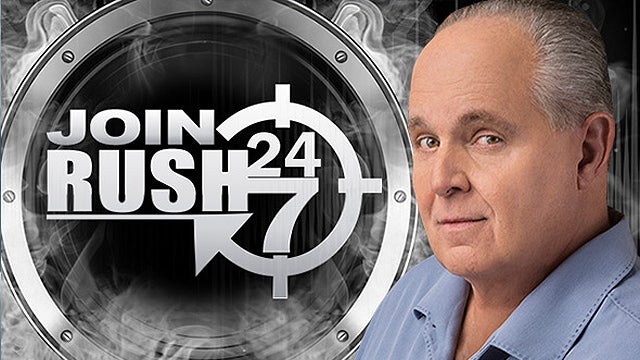 Now, a little addendum. iOS 13’s only gonna be live for 10 days. On September 30th they’re gonna release iOS 13.1. There were a couple — actually more — a couple of big features that they were unable to get working in time for 13.0. And they’re pretty cool. One of them is a power user feature, it’s the automation of shortcuts. The other is a maps feature called Share ETA. And it also is gonna be more refined, fewer bugs, 13.1 is really what you want to focus on on September 30th.

13.0 has dark mode in it, which is cool looking. It’s easy to switch from the light mode to dark mode. Just put the dark mode icon in the control center, pull down upper-right-hand corner on a X class phone, tap on the icon and you’re immediately in dark mode. Settings, mail, messages, maps, they look so cool in the dark mode. And of course our app is so optimized. So, it’s all cool, it’s all good. Just make sure you upgrade the Rush Limbaugh app before you put iOS 13 on.

RUSH: Just got a new beta of iOS 13.1, beta 4. This is what’s coming on September 30th. Now, I have been asked to remind you, not remind, but give you an added bit of information. The correct version number of the Rush Limbaugh app is version 4.4. If you’re running 4.3, 4.2, you’re running the old version. The new version’s 4.4.

So, you go to the App Store and it will either say Updated or Update. But the version you want is 4.4. You can’t choose the wrong one. You’re either running an old one and need to update to the new one, the new one is 4.4.

RUSH: By the way, folks, there’s one real great advantage to the Rush Limbaugh app. You can download whatever you want. You can download transcripts and read them offline. You don’t have to be connected at all times to read things that you want to read, like if you get into an area with no coverage. You can do that in advance.

RUSH: Let me remind of you one more advantage of the Rush Limbaugh app. You know, a lot of news apps, you can’t download what you read. You have to read them online. That’s how they get their advertising clicks and track you and all that. You can on the Rush Limbaugh app. You can go to it, and if you see a transcript of a segment that you want, you can download for reading it offline if needed in an area with no connection.

Like if you’re in New York on the subway and you lose connection? No big deal. Download it before you get on the subway or anywhere else where you happen to be that you lose coverage, you can download the transcripts or other elements and read them offline with no penalty. We encourage it, because we are a full-service app, wanting you to have as much convenience and ease as possible in accessing the content.

‘Cause we don’t sell clicks and we don’t track you and we’re not trying to sell targeted advertising. None of that! I mean, there’s advertising on it, but not tracking you and following you around. We can’t stop Google from doing it, but that’s not our purpose. And we try to ride herd on that stuff. The big deal is that you can download and read anything offline without any penalty from the app or us whatsoever. Get the latest version. It’s 4.4. It’s live in the App Store for you now. Install it before iOS 13’s released tomorrow.